100 Years Bauhaus: A place for the new, a place for experimentation

The Bauhaus was young, creative, dynamic – and 100 years after its founding, it’s still considered one of the most important schools of design in the world

EEverything different, everything new. Rational simplicity rather than newfangled extravagance. Clear geometry rather than ornate embellishment. The architectural Bauhaus creed: light, air, and sun. Large glass surfaces, white facades, cubic shapes symbolize the new clarity and openness of this design philosophy. Founded in 1919 in Weimar, the Bauhaus strove to unite art and crafts. In the workshops, ideas, designs and models were created that were to be functional, of high quality, and affordable. From teapots to carpets, to the finished home – people are to be surrounded by harmony and honest craftmanship in their living spaces. The materials stone, wood, metal, fabric, color, glass and clay are the essence of Bauhaus style. The goal: to develop independent prototypes in the workshops that could be marketed with big manufacturers.

Creating something new
In 1919, the world was changing, the war was over, democratic republics were established in Germany and Austria. These changes were reflected in the message of the designs as well: Get rid of the pompous, overly elaborate styles. Look forward, dare to do something new, use new materials.

Material: Tubular steel
A famous example: the revolutionary Bauhaus chair B5. No four legs or an upholstered seat but bent tubular steel with leather straps pulled taut as a seat and backrest. Bauhaus painter Wassily Kandinsky admired it so much that it was later called the Wassily Chair.
A classic that continues to be produced in many variations today.

Move to Dessau
After funding had been cut, the Bauhaus moved to Dessau in 1925. There, a spectacular school was built (today a World Heritage Site). In 1928, Gropius resigned as director; architect Ludwig Mies van der Rohe became director of the Bauhaus in 1930. In 1931, the National Socialists won the municipal elections and forced the closure of the school.

The founder and his team
He’s considered the inventor of the Bauhaus: Walter Gropius (1883-1969). The architect and son of a Berlin privy councilor is appointed director of the newly established “Staatliches Bauhaus” in Weimar in 1919. The core message in his manifesto: Architects, sculptors, painters … we all must return to crafts. Gropius was able to engage some of the most important artists of his time as teachers: the painters Paul Klee and Wassily Kandinsky, the sculptor Oskar Schlemmer, the photographer László Moholy-Nagy, and the designer Marcel Breuer who invented the famous B5 cantilever chair.

Though the Bauhaus was founded at a time of revolution for women too, female students remained on the periphery of the circle of male Bauhaus members. There was, however, some strong female influence: Gunta Stölzl created the weaving class and became well known for her work, as did Bauhaus photographer Lucia Moholy and the designers Marianne Brandt and Alma Siedhoff-Buscher.

Conquering the world
100 years of Bauhaus, 100 years of inspiration! The Bauhaus founded in 1919 only existed for 14 years but its success story went on after its closure – this time, internationally!

Many Bauhaus members emigrated, particularly to the U.S., to continue their work. Walter Gropius became director of the influential Harvard School of Design in 1937 and was able to further develop his ideas there. His colleague Mies van der Rohe built the famous “Federal Center” in Chicago and designed the legendary “Seagram Building” in New York in 1950. Their former fellow member László Moholy-Nagy carried on the Bauhaus concept in Chicago as “New Bauhaus” starting in 1937.

From Tel Aviv to Brasilia
Manifestations of this clear, functional style can be found all over the world. In 1930, Jewish Bauhaus architects who had emigrated began building the White City in Tel Aviv. With over 4,000 buildings, it is the world’s largest Bauhaus ensemble and has been a UNESCO World Heritage Site since 2003.

In Nigeria, Bauhaus student Arieh Sharon built the country’s biggest university in Ile-Ife with space for 35,000 students. In Barcelona, the German Pavilion was built, in St. Petersburg the Red Banner Textile Factory. Asia, Africa, America – Bauhaus style can be found everywhere. The modern cityscape planned by architect Oscar Niemeyer for Brazil’s capital Brasilia (built between 1957 and 1964) also contained many Bauhaus elements. And there was another fan of this clear simplicity. Apple founder Steve Jobs called Bauhaus one of the biggest influences on his product design.

They’re functional, timeless and are still produced under license. On these pages, we present seven design classics from the Bauhaus era

Mondrian dress
The fashion designer Yves Saint Laurent made it 1965 famous: Mondrian dress in Bauhausstyle. The name was given to it because its design is inspired by the style of the Dutch artist Piet Mondrian, who worked closely with the Bauhaus. (copy by redbubble.com, 50 Euro)

Wassily Chair
Tubular steel with leather straps – this chair designed at the Bauhaus in 1925 went down in history as the  Wassily Chair. (knoll.com, from. 2,300 Euro)

Legendary lamp
The famous table lamp WA 24 was designed by Wilhelm Wagenfeld at the Weimar Bauhaus in 1924. (Prediger.de, from 420 Euro)

Tubular steel desk
Simple and functional: The tabletop of the Bauhaus desk S 285 is fit into a tubular steel frame. (chairgo.de, from 1,200 Euro)

Flexible nesting table
Designer Marcel Breuer enjoyed working with tubular steel. In 1925, he designed the nesting table B 9, offered as a four-piece set that can be stacked together. (cairo.de, from 2,300 Euro) 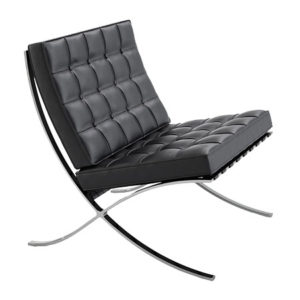 Barcelona chair
Ludwig Mies van der Rohe created the Barcelona chair in 1929 for the German Pavilion at the International Exposition in Barcelona – a milestone of modern design. (knoll.com, from 6,000 Euro)

The centenary of the most influential modernist art school is being celebrated with big exhibitions. Here is a selection of some interesting and important events 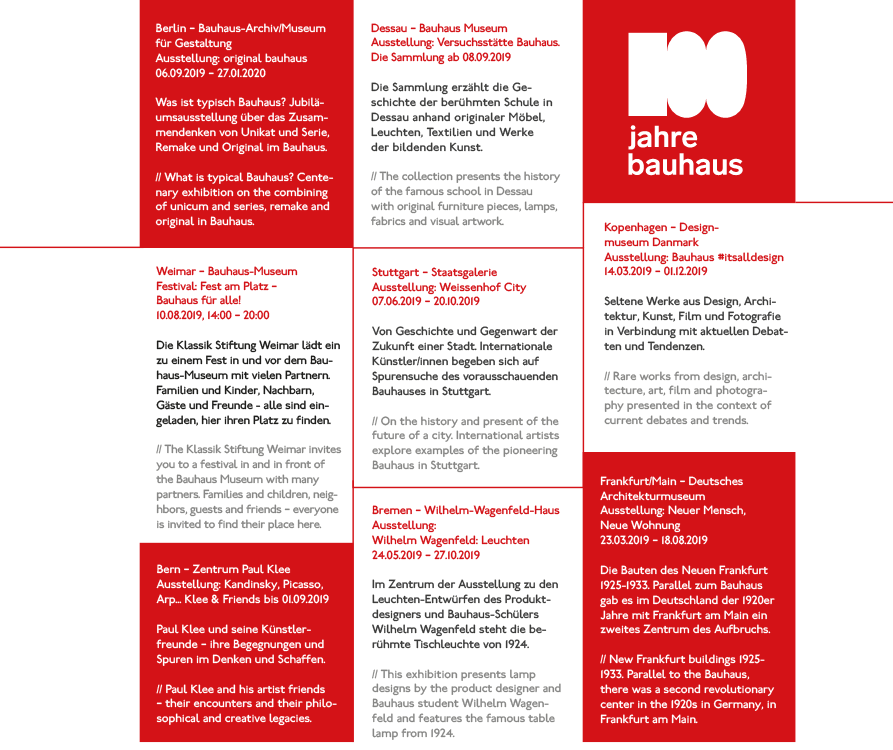 More informations about the hotels: