The Cheese Road in Bregenz Forest – In the land of cheese

“Eassand Käs und nüd das tüür Brod!” – eat cheese and not the expensive bread, goes the saying in Vorarlberg vernacular. In a region where Alpine cheese has been considered a staple for centuries and is still elaborately made by hand today, this is little wonder. Cheese Road in Bregenz Forest was established here in 1998 as a collaboration between farms, Alpine dairies, inns and hotels with the aim of preserving and promoting the traditional Bregenz Forest cheese culture.

The secret recipe for good milk
There are over 50 different types of cheese in Bregenz Forest. What’s special about the cheese here is the “silage-free” production: the cows are only fed fresh grass, hay and grain.

Only two percent of all milk farmers in Europe produce silage-free and Bregenz Forest is the largest associated region in the EU where cows can graze in lush green pastures to their hearts’ content. The animals in Bregenz Forest enjoy a centuries-old kind of agriculture called transhumance. Here, the dairy cows graze at middle elevations in spring and fall, in high mountain pastures in the summer, and in winter they are fed hay from the valley pastures.

Tradition meets innovation
“Wild herbs that grow in the Alpine pastures are the secret ingredient of our cheese,” reveals Antonie Metzler, host at the Romantik Hotel “Das Schiff” in Hittisau, one of the 24 communities on the Cheese Road. “Traditionally, mostly Alpine cheese at different maturity levels was produced along the Cheese Road,” the cheese expert explains. “But, nowadays, our creameries are highly innovative and create diverse variations.”

At the dairies’ sales counters, one finds semi-hard cheeses like red wine, beer or hay cheese, soft cheeses like Münster or Camembert, and milk cheese from cow or goat milk. “Each inn, hotel and restaurant interprets the subject of cheese in its own way,” says Antonie Metzler. That cheese is omnipresent here is something guests notice in the morning in the breakfast room at the latest. “Just at the breakfast buffet alone we have nearly 20 cheese varieties from the region and cheese is always an element at our restaurants as well – from cheese soup to curd cheese dumplings, leaf lettuce with goat cheese, Alpine cheese tartlets to goat cheese ravioli.”

At Europe’s cheese hub
Those who’d like to sample traditional Bregenz Forest cheese should visit the Metzler family. “We have a cheese cellar at our hotel where we offer cheese tastings or cook menus with cheese.” In neighboring Lingenau there is another renowned cheese cellar. It’s the largest center for aging and storing mountain and Alpine cheese in all of Europe – a must-see for cheese fans. Visitors not only get to take a look at the maturing cheese but learn all about the origins and history of the Cheese Road. Naturally, they also get to sample regional products. Those not content with just observing and sampling can train to become cheesemakers themselves on the Cheese Road. At his farm in Egg, where visitors can dine and children can experience nature up close, Ingo Metzler and his team offer courses in which guests can learn to make their own fresh cheese. The advantage of fresh cheese is that it doesn’t need to mature first in the cellar before it can be eaten. 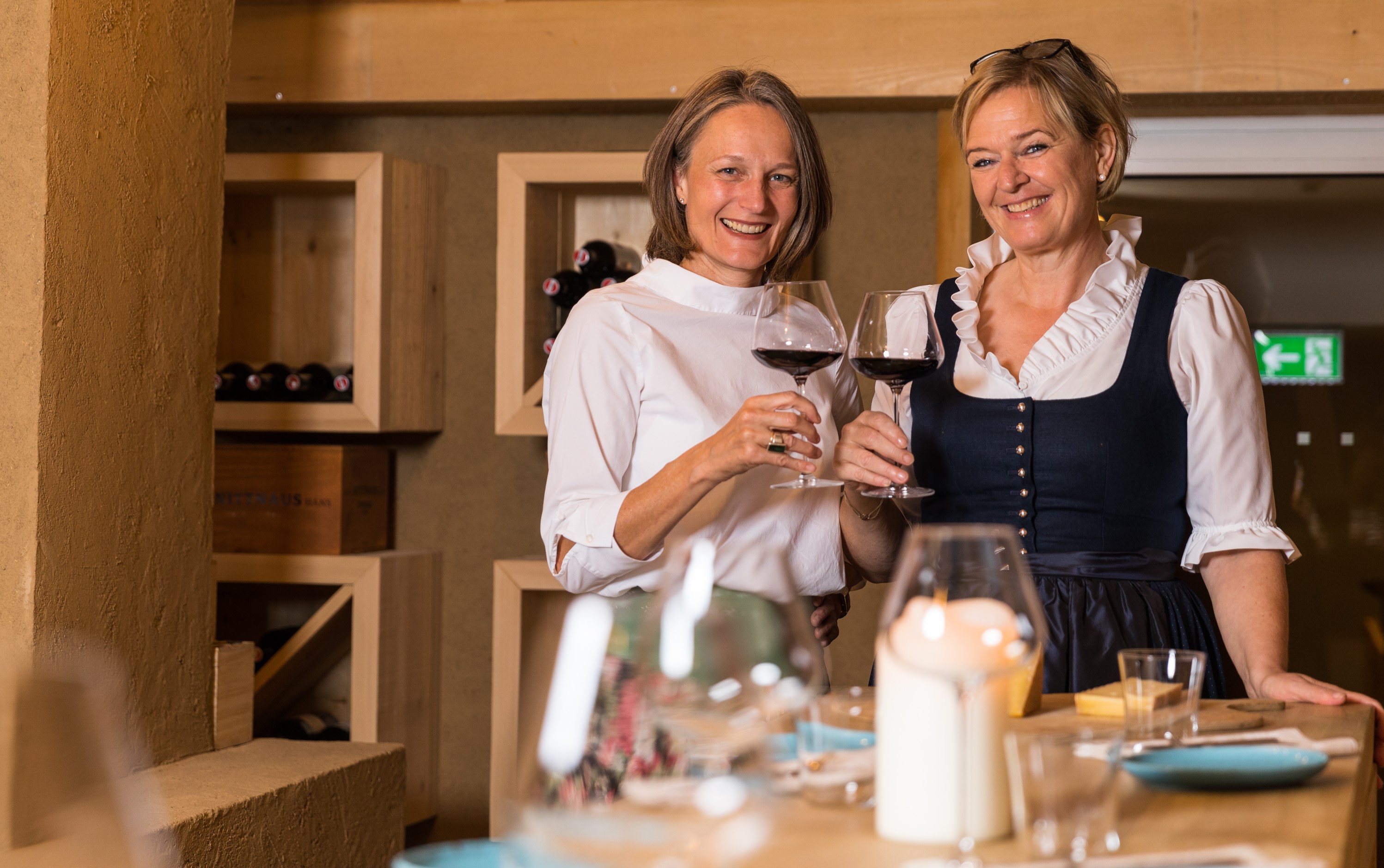 How much can a cheese cost?
At 1,000 euros per kilo, Serbia’s Pule is the most expensive cheese in the world. It is produced with milk from the highly endangered Balkan donkey and is very rare. English White Stilton Gold sells for 700 euros and Swedish moose cheese for around 500 euros per kilo.

World cheese champions
Every year, the World Cheese Awards recognize the best cheese in the world. In 2019, a U.S. cheese won for the first time – Rogue River Blue, a blue cheese from a creamery in Central Point, Oregon.

Are cheese rinds edible?
Naturally ripened rinds, such as on Roquefort, are perfectly fine to eat. It’s best not to eat rinds on hard or semi-hard cheese because they are often treated with the antibiotic natamycin. With organic cheese this is forbidden so its rind is fine to eat.

The milk makes the cheese 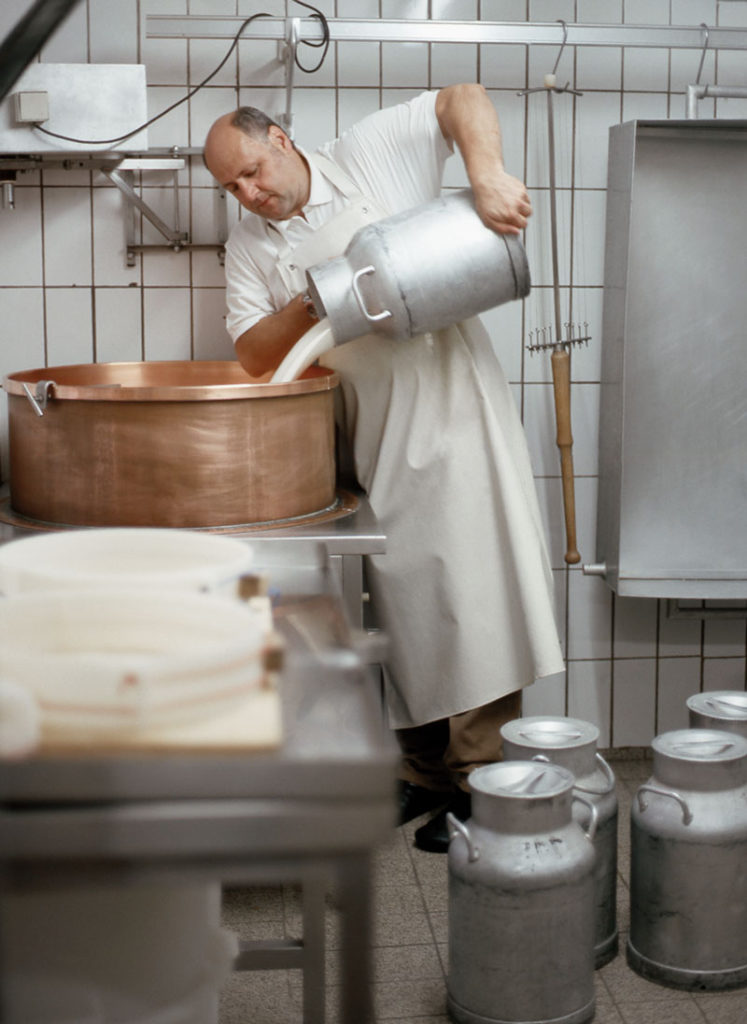 // From the heart cheesemaker – Karl-Josef Fuchs at his favorite hobby

Karl-Josef Fuchs worked successfully as a hotelier and chef for decades. Then he discovered his passion for cheese and opened his own creamery. In this interview, he tells us how he became a cheesemaker and what makes a good cheese.

You were a successful chef for many years. What made you want to work with cheese?
As a chef, my work always involved food so there was a natural connection there. An acquaintance of mine had opened a creamery and encouraged me to try it as well. He said, “You’re a chef and you have good milk, you can do it too.” So, in combination with my cooking, I taught myself.

What kinds of cheese do you produce?
We have three different cheese varieties. Our mountain cheese is a typical upland hard cheese, the “Obermünstertaler” is a soft cheese and our “Molkenziger” is a fresh cheese, an Alemannic ricotta. As we’re a small creamery, our cheese is primarily produced for our guests and for a few selected hotels and colleagues in the region.

What makes a good cheese?
For good cheese you need good milk. But that in turn is determined by a number of factors that all have to come together. In addition to a good dairy cow breed, you need the right climate, the right feed, good soil – just like the terrain for wine. And, of course, for production you need some special equipment like the copper kettle, the rennet, and the molds for the cheese; but as the base product, the milk is most important.

What kind of milk do you use to produce your cheese?
Our cheese is made from milk from the Hinterwald cows typical for our region. The cows graze in an unimproved pasture of a farmer here in Münstertal where they live in harmony with nature. A variety of grasses and herbs grow in the pastures and the regular cow grazing keeps the pastures in good condition. This completely natural nutrition is ideal for the cows and this is reflected by the quality of the milk. No artificial flavor in this world can copy what a mountain meadow brings to the table – luckily.

What gives the cheese its flavor?
The cheese tastes differently depending on the time of year. This is because the cows’ food also varies throughout the year. The fresher and lusher pastures in spring and summer increase the fat content in the milk. Spring milk can contain 4.6% fat while winter milk normally has 3.7%. What the cows eat also affects color. The chlorophyll in the plants that the cows eat make summer cheese far yellower in color than winter cheese.

Can extra flavor be added to the cheese?
The less I fiddle with the cheese, the more you can taste nature. With hard cheeses, you can’t later change the flavor. But you do have to take exact care of the cheese while it’s maturing: the cheese is turned two to three times a week and rubbed with the salt brush. That’s the only change in flavor that I add at this stage. Salting is a cheesemaker’s signature. 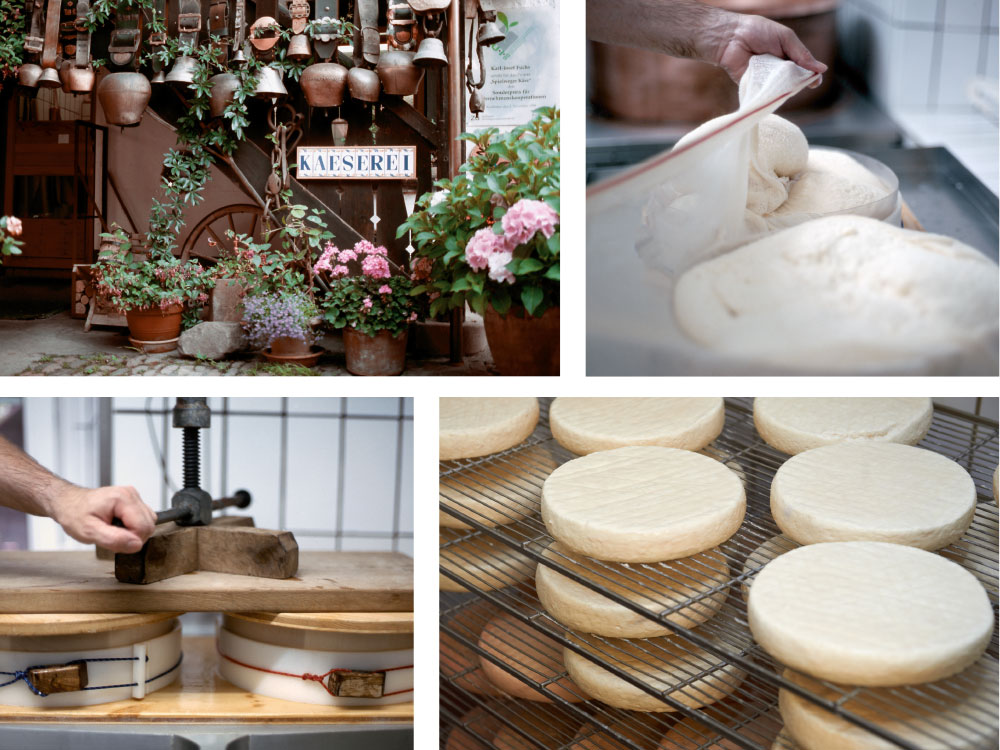