Fish from the North Sea – Fresh on the table

It is the unique taste of wind and waves that never ceases to delight.

The North Sea breathes the rhythm of the tides. The ebb and flow of the tide, the roar of the surf, the silence of the mudflats. A fascinating natural spectacle in the midst of unmistakable landscapes. Long sandy beaches, dunes, the Wadden Sea with its species-rich flora and fauna. Above it all, the fresh breeze, the unmistakable smell of seawater, the endless horizon, the desire for adventure and freedom. Sailors and surfers, hikers and mudflats walkers, fitness fans and gourmets – the North Sea has something for every type of holidaymaker, for every desire.

Treasures from Neptune’s realm
The popular region between Germany and the 67-kilometre-long Belgian coast has a lot to offer in the way of culinary delights. Freshly caught specialities straight from the sea, prepared by top chefs in the Romantik Hotels – culinary treasures from Neptune’s realm freshly served on the table. The choice is huge – the North Sea is one of the world’s richest marine areas in fish and species. The focus of fishing is on mackerel, cod, haddock, saithe, herring, plaice and sole. Mussels, oysters and crabs complete the maritime offer.

Crab fishermen on horseback
Among the most popular delicacies are plaice fresh from the cutter and crabs, which strictly speaking are shrimp. Traditionally, the fishermen go out in small crews of three to four men on their cutters. On board, the freshly caught crabs are also immediately boiled in seawater. This gives them their pink to reddishbrown colour and their special aroma. Well-known cutter harbours include Husum, Büsum and Pellworm.

On the Belgian coast, North Sea prawns are still caught by fishermen on horseback. In this 500-year-old custom, the riders sit on traditional wooden saddles and on the shallow beaches cold-blooded horses pull the nets behind them through the water. The catch is immediately cooked and sold on the beach, for example at the crab festival in Oostduinkerke (Flanders), which is celebrated every year on the last weekend in June.

So healthy are crabs

Shrimps not only convince with their special taste, they are also real power wonders. They provide high-quality protein, minerals and vitamins, are low in fat and yet make you feel really full. North Sea prawns really score when it comes to vitamins. Under their crunchy shells are vitamins A, B, C, D, E and K as well as folic acid. They also contain minerals such as iron, iodine, calcium and magnesium. An energy package that loses plenty of weight before being eaten. From one kilogram of North Sea crabs, around 300 grams of crab meat remain after peeling. 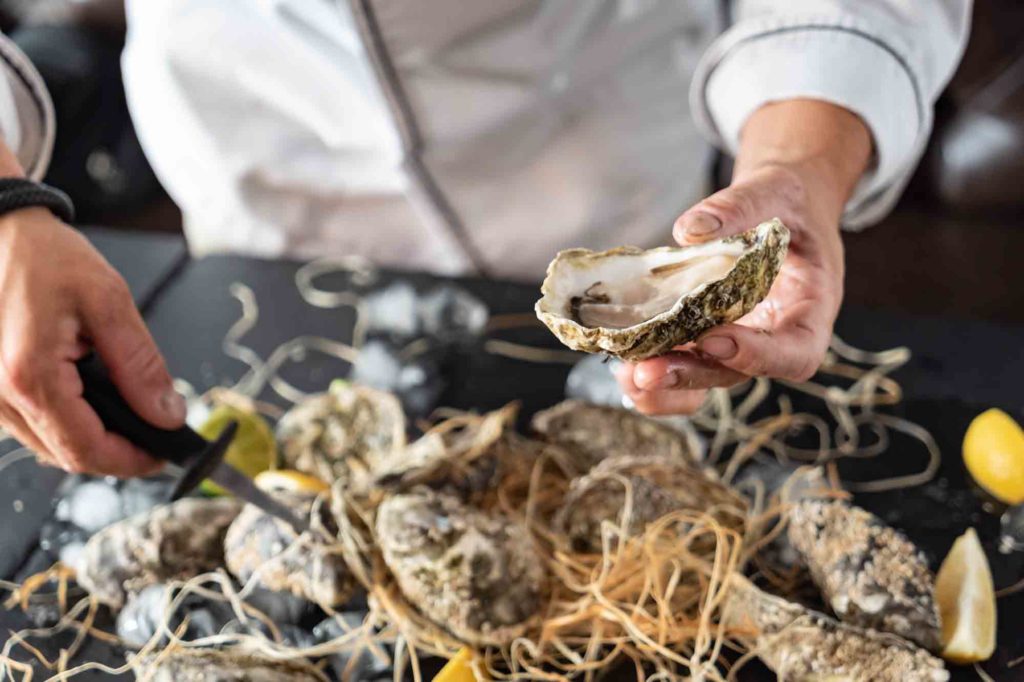 Another North Sea delicacy is also full of healthy energy. Oysters are the purest superfood because they contain numerous vitamins and minerals, but hardly any fat and carbohydrates. Oyster expert Wilco Berends from Romantik Hotel De Nederlanden: “To enjoy the full taste of an oyster, you shouldn’t just slurp it and swallow it. The longer you chew, the more intensively the characteristic flavours unfold.”

Classically, oysters are served raw in their shells, on ice and with lemon slices. The “Sylter Royal” oyster, cultivated in the Lister Wadden Sea, enjoys a special reputation.

Those who are not passionate oyster eaters will find plenty of alternatives on the North Sea. For example, at the Romantik Hotel Achterdiek on the East Frisian island of Juist with a sweeping view of the Unesco World Heritage Wadden Sea and host Stefan Danzer’s recommendation: “Fried fillet of rockfish in vegetable butter with pointed cabbage hearts and heather potatoes.”

Or in Zeeland at the Romantik Hotel Auberge de Campveerse Toren with its sole and lobster specialities. The historic building is right on the harbour, was built as part of the fortress of Veere and has served as an inn for five centuries.

There are wonderful opportunities to enjoy the freshly caught treasures of the sea all around the North Sea. Whether in a restaurant with a refined menu, as a midday snack at the harbour or casually on the beach with a fish roll – the magic always remains the same. It is the unique taste of the ebb and flow of the tide, of wind and waves, that never ceases to delight.