Long appreciated, this most elegant of bivalves was already popular with the ancient Romans. As the fruit of the goddess of love, Venus, the oyster was seen as an aphrodisiac, and it is still associated with luxury and gourmet pleasures.

At the same time, it can also be described as a superfood because it contains many vitamins and minerals, but hardly any fat or carbohydrates. Oyster expert and Michelin star chef Wilco Berends from the Romantik Hotel De Nederlanden (Vreeland, Netherlands): “To enjoy the full flavor of an oyster, you shouldn’t simply slurp it up and swallow it. The longer you chew it, the more intensively the characteristic flavors will develop.”

Oysters are generally to be found on rocks at low tide; they thrive best in clean saltwater or in areas where saltwater and fresh water come together. Once fully grown, the oysters are detached from the reef with rakes or ropes, and are then collected by hand or mechanically. Next they are cleaned in a sedimentation tank, and then go on sale. 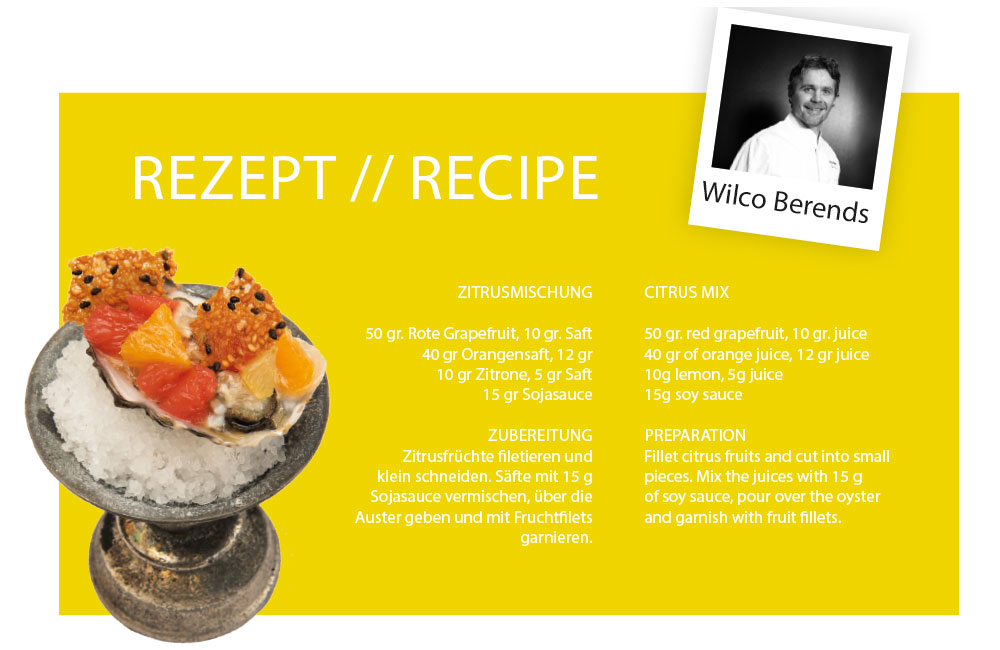 When you open an oyster you should use a kitchen towel or a special oyster glove to avoid injury. Hold the oyster with the convex side in the palm of your hand, with the point facing toward your body. Place the oyster knife on that tip, and slide it in using a gentle pressure. Now open up the shell by twisting the knife, cut through the hinge (muscle) inside, and remove the upper shell. Separate the meat from the shell with the knife – it’s ready to eat!

When are oysters in season?

The classic rule is that oysters should only be eaten in months with an “r” in them. The reason for that rule was that oysters reproduce in the summer months, and this is associated with flesh that has a milky consistency, and poor quality. Meanwhile, this temporary restriction is avoided because most farmed oysters are what is known as “triploid”. These sexless creatures don’t need to reproduce, so they can be eaten all year round. Since they also grow one-and-a-half times faster than conventional oysters, they are very popular with oyster farmers thanks to higher returns. There are over 50 different species of oyster worldwide. These mainly break down into the flat, round European oyster, and the deeper, longish Pacific oyster. The more specific designations usually relate to where the oysters are found.

The most important point when buying oysters is freshness. The oyster should still be alive, and the shell should be closed. Oysters can be served in the classic way: raw on the shell, on ice and with slices of lemon. Alternatively, they can be boiled or baked.

Wilco Berends loves serving oysters in different ways. Often enough, his creations such as baked oysters with duck liver and chicken, with gin and tonic, or with vodka and caviar win over oyster skeptics as well: “It means that many diners come to enjoy the taste, even though they absolutely refused to try them initially.”

More about the hotel: romantikhotels.com/Vreeland

The most popular types of oyster

Limfjord
Grown on the world’s most northerly oyster banks, this Danish species is considered to be one of the best. The fjord water means they have hardly any salt in them, and a mild flavor.

Marennes
At home in the French Atlantic, this popular species has an intense oceanic flavor. They can be recognized by their green flesh.

Gillardeau
Named after Gérard Gillardeau, who first cultivated them, they are extremely popular with gourmets. Slightly nutty and delicately piquant flavor.

Belon
Said to be the best type of oyster, they are named after the river in Brittany. They don’t grow on rocks but on mudflats. Delicate, nutty flavor.

Sylt Royal
Germany’s only oyster, it is cultivated in the List Wadden Sea. Very fleshy, nutty flavor with minimal salt.

TsarSkaya
One of the most exclusive oysters, they mature in the bay of Mont-Saint-Michel. Creamy, meaty texture with an oceanic, slightly sweet flavor.