While candy is tossed to the crowds in Cologne, Mainz and other celebratory strongholds, two teams in Piedmont start throwing oranges at each other. Unusual Carnival traditions – the orange throwers aren’t alone...

They protect themselves with helmets and shields and compete in a battle with a long tradition. On the Sunday before Ash Wednesday, in the Italian city of Ivrea (Piedmont) with its 25,000 inhabitants, two competing groups with a total of around 3,000 participants battle each other with flying fruit – they throw oranges. This spectacle has its origins in the Middle Ages when citizens of the city used these “missiles” to drive out an unpopular feudal lord – with success, as legend has it. Each year, the fun Battle of the Oranges (“Battaglia delle arance”) commemorates this grand triumph over the tyrant as spectators cheer. The winning team is honored on Shrove Tuesday and festivities conclude on Ash Wednesday with a traditional meal with fish and polenta. 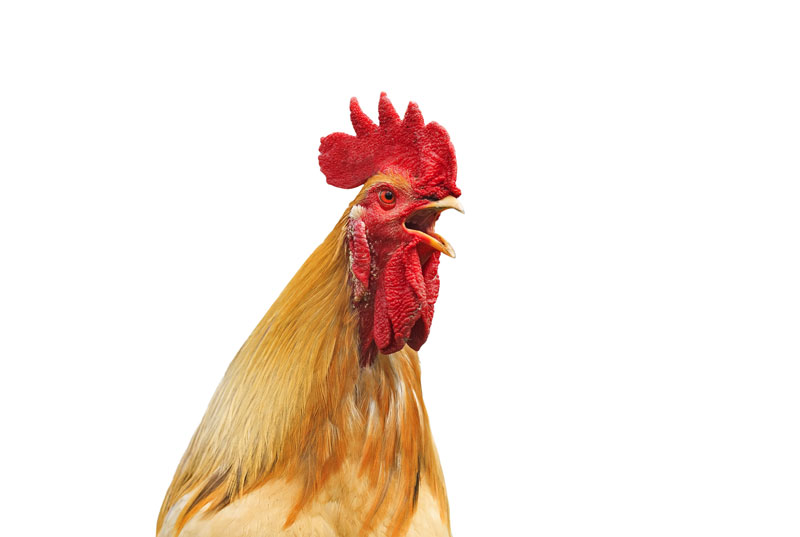 They have to blindly rely on the spectators! In the district of Aschaffenburg (Franconia), there is a very special tradition on Rose Monday called “Gickelschlagen” (“rooster whacking”). All participants wear big rooster masks that they cannot see through. Their task: With a traditional threshing flail, they have to strike the milk pot. In this game, which strongly resembles the Hit the Pot game known from children’s birthday parties, the audience calls out to the candidates and tells them in what direction they need to walk. Whoever hits the milk pot first wins and can take off the rooster mask.

Fountain leap for a kiss

A chilly Carnival tradition! In Munderkingen (near Stuttgart), two men in costumes jump into the ice-cold water of a fountain. Before jumping, they warm up with a cup of hot punch. Once the two courageous revelers have climbed out of the fountain again, they are allowed to splash and kiss any ladies present.

There goes the big fish 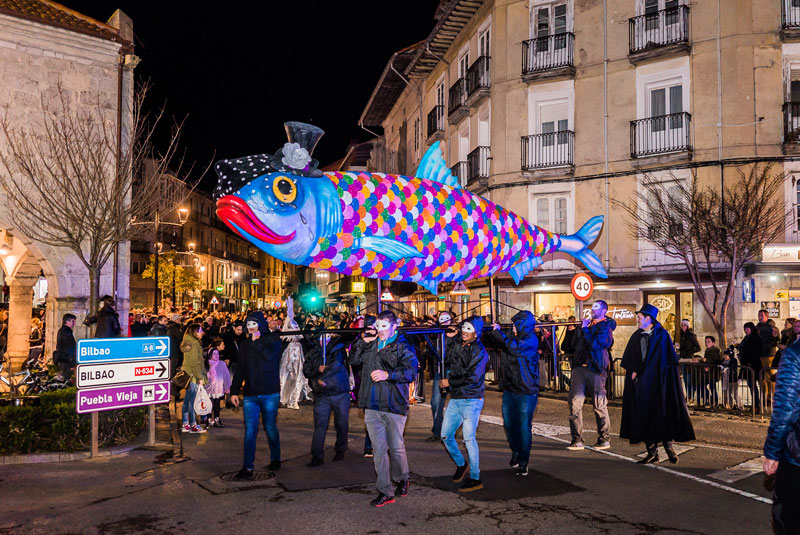 Colorful, cosmopolitan and with big parades – this is how Madrid celebrates its carnival. The highlight is the annual closing ritual. At the funeral of the sardine groups in mourning carry an oversized papier-mache imitation of the small fish across the city to its resting place in the Plaza de las Moreras. Originally, in this old custom meat was buried to herald the end of the carnival and the beginning of Lent. During the transmission however, “cerdina” (old term span. “pork”) became “sardina”, who now gets a ceremonial burial on Shrove Tuesday. They are also eaten on this occasion, but on carnival preferred in chocolate form.

It’s a wild race! Every year at the festive Carnival celebration on the Canary Island of Tenerife, rambunctious men squeeze their feet into high heels and compete in an obstacle race in the capital Puerto de la Cruz. There are two rules to the race: Heels have to be at least 12 centimeters high and runners must be dressed in women’s clothing. Broken heels and staggering male legs are guaranteed. 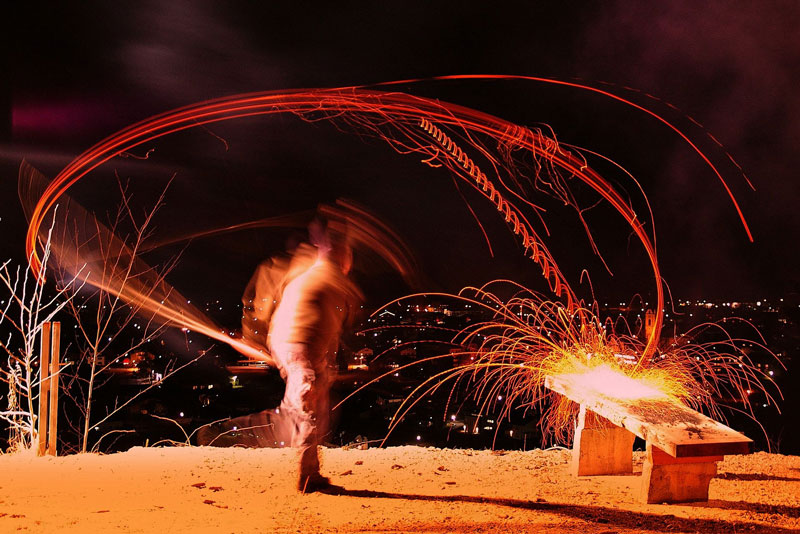 On the first Sunday in Lent, a cherished ritual begins at dusk – “Scheibenschlagen” (“disk flinging”)! In South Tyrol’s Vinschgau, residents take branches and disk-shaped pieces of wood and head for a hill above their village. The wooden disks have a hole in the middle and are placed in a bonfire until they glow; then they are placed on a flexible branch and flung toward the village. It’s a fertility ritual and also an opportunity for each thrower to make a personal wish before flinging the disk. Once all of the wooden disks have been thrown into the valley, a torchlight procession takes everyone back
to the village.

Fright in the night

Remote valleys have long been the origins of myths and traditions. At Carnival time, the “Tschäggättä” prowl around Lötschental (Upper Valais). These are figures wearing wild costumes often made from sheep- or goatskins and eerily painted, hand-carved masks, cowbells, and carrying sturdy sticks. They scare anyone still on the streets in the evening. Traditionally, only young, unmarried men were allowed to don the costumes and frighten people. Today, the rules are more relaxed and respectable family men wear the “Tschägättä” outfit This tradition takes place between the Catholic holiday Candlemas and “Gigiszischtag” (Shrove Tuesday). Highlights of the celebration are the “Tschägättä” parades on February 23 and 25.t. 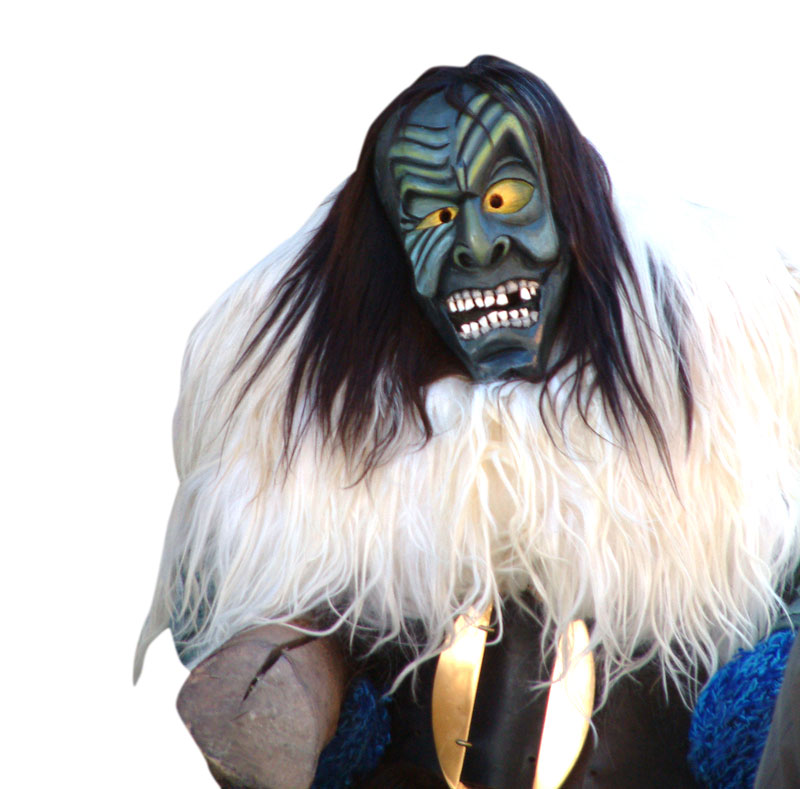