You need a lot of patience when you are trekking with a donkey – and it will be rewarded in the end. 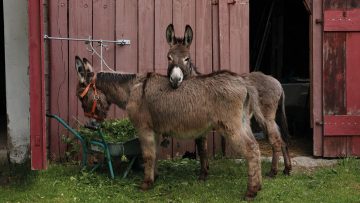 Animal-friendly! Düsel (5) and Günter (8, front) are looking forward to a juicy meal.

here are four important rules when you are on your way to adventure with these headstrong companions. First: At the start, don‘t let the animals just start grazing or else they won‘t go a step further! Second: Talk to them in a friendly and encouraging way. Third: If the donkeys stop, just ignore them. They will start moving again soon. And fourth: Never lose patience and smile away any possible chagrin.

So much for the theory. But how does it look in practice? For starters, very inviting: Düssel (5) and Günter (8) look at the sunny morning with their ears upright and a calm gaze. The two donkeys are great buddies who belong to the host of the Romantik Hotel Markusturm in Rothenburg (Tauber) and are a familiar sight in this place with its medieval Old Town. But they feel most comfortable when they go wandering through nature with hotel guests once a week outside the city walls.

END_OF_DOCUMENT_TOKEN_TO_BE_REPLACED

How far can you get with the four golden rules? As far as distance itself is concerned, not very far, but a good way in other respects. Düsel is grazing to the right of the roadside; Günter is chewing left of the roadside. A well-rehearsed team who will not let themselves be kept from stopping to eat by any regulation in the world, even for a second. After five minutes, as if on a secret command, they suddenly go leisurely on. On quiet country roads through the Tauber river valley, by vineyards, forests, meadows and ponds. Always interrupted by breaks for eating. But sometimes they just stand still. The deeper reason is known to these two alone.

The slowness is irritating in the beginning, but then it does you good. Let go, get involved with the animals. Discover nature, just sit down lazily in the grass. That you aren‘t covering any long distances at the same time – whatever! Donkeys are supposed to be stupid and stubborn? Okay, they really are stubborn. Our donkeys are descended from the African wild ass, and in case of danger they would simply stand still, seeking a firm footing – that was the safest thing in the stony, hilly landscape. And our long-eared friends inherited this stubborn behavior from their ancestors. But stupid? They cannot be hurried along, don‘t play by any rules, are relaxed and self-determined. This doesn‘t sound very simple-minded, but rather pretty smart.

The view from the green surroundings towards medieval Rothenburg. Germany‘s probably most famous historic city has existed since the 12th century and has preserved its original character to this day. Winding alleyways, old watchtowers and half-timbered houses form the picture in the Tauber river valley. As the southernmost town in the Franconia wine region, Rothenburg is also known for its excellent wines.