Hardly any other product is as closely associated with Switzerland as chocolate. What makes it so special, where was it invented, what secrets are there in its preparation? Join us on our sweet search.

oblerone, Lindor balls, Sprüngli pralines, the bars from Cailler, Villars and Ragusa – who doesn’t know them, the classics of the Swiss chocolate manufactories. When these melt in your mouth, moments of pleasure and happiness arise to which you can become addicted. 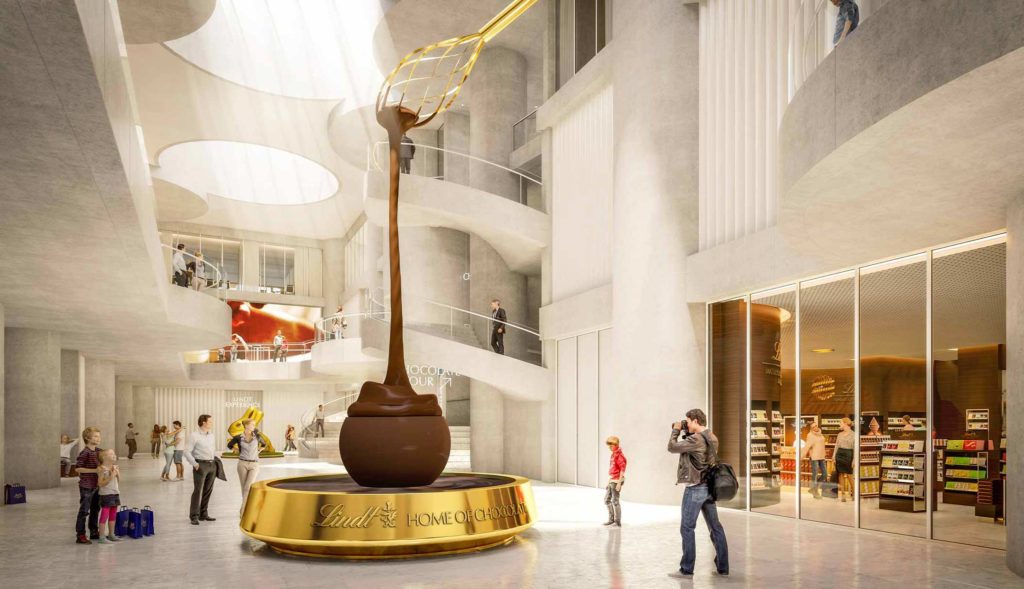 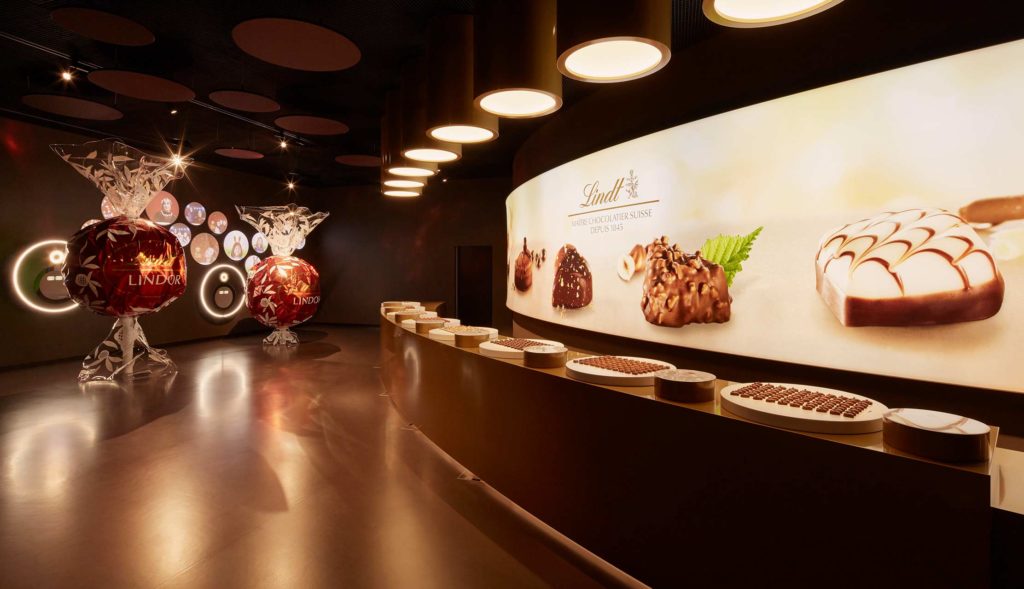 The whole world of chocolate

Since 10 September 2020, the world has been enriched by a chocolate attraction. The new Lindt Home of Chocolate, a unique chocolate centre with an interactive museum, research facility, show production and many other highlights and superlatives – such as the over nine-metre-high chocolate fountain in the foyer or the largest Lindt Chocolate Shop in the world – has been built in Kilchberg near Zurich.

On 1,500 square metres, visitors go on a journey through time, immerse themselves in the history of chocolate and walk in the footsteps of the Swiss chocolate pioneers. Some secrets of chocolate production are also revealed. At the end of the tour, numerous sweet masterpieces are waiting to be tasted in the tasting room. 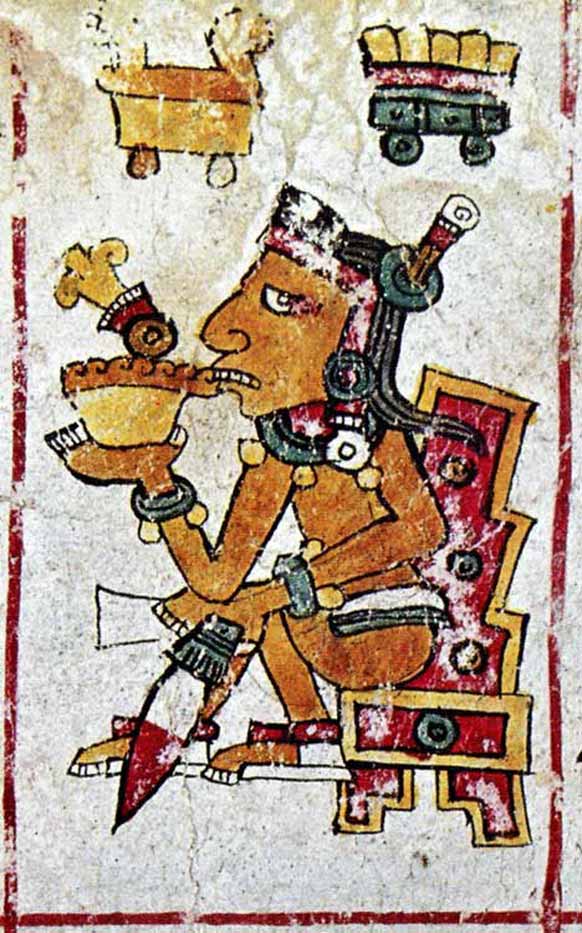 The Aztecs called the drink of the gods “Xocolatl”, which means “bitter water”.

Chocolate history
Chocolate originated in Central America, in what is now Mexico, Guatemala and Honduras. This is where the Aztec and Mayan people lived, whose ancestors were already cultivating cocoa around the 4th century AD. From ground cocoa, spiced with chilli, vanilla and honey, the Aztecs prepared the drink of the gods “Xocolatl”, which means “bitter water” and phonetically carries the origin of the word chocolate.

Chocolate came to Europe through the Spanish explorers in the 16th century. According to a legend, it was Columbus who brought the first cocoa beans back from his voyages. From the court in Madrid, chocolate began its journey of pleasure to the royal and princely houses of Europe, before industrial production made it affordable for ordinary people around 1800.

Swiss chocolate pioneers
Switzerland was one of the first countries to start mass producing high-quality chocolate, encouraged by the inventive spirit of its pioneers. In 1819, François-Louis Cailler opened a modern factory high above Lake Geneva, where chocolate was produced in bar form for the first time. The idea of adding condensed milk to the chocolate mass also came from the Cailler house. This was the birth of milk chocolate.

Philippe Suchard followed in 1826 with the opening of a chocolate factory. The Suchard brand became known for its artistically designed packaging, posters, postcards and collector’s cards, which were elaborate for the time. The Swiss are chocolate connoisseurs and generously promote the sales of the domestic industry. With an average per capita consumption of 11 to 12 kilos a year, Switzerland is one of the countries with the highest chocolate consumption (for comparison: Germany with 5.6 kilos).

The secret of good chocolate
The basic ingredient of all chocolate is cocoa. The higher the quality, the better the end product. Fine cocoa beans come from Venezuela, Ecuador, Bolivia, Cuba, Madagascar and the Ivory Coast. The fruits are gently harvested at the best possible time and processed with the highest quality and care. In the beginning, chocolate was still a crumbly, sandy and somewhat bitter mass. Then, in 1879, the Swiss Rodolphe Lindt invented the chonching process, the core of which remains a family secret to this day. Only this much: the skill consists in controlling the chocolate mass while stirring and at the right temperature so that undesirable flavours evaporate, but desirable ones do not. Some chocolates are conched for up to 48 hours. The better this is done, the better the chocolate melts on the tongue when tasted. This is referred to as a “delicate melt”.

Chocolate knowledge for everyone
Those who want to dive deeper into the subject can attend a chocolate seminar at the Romantik Hotel Schwanefeld. In cooperation with the Sächsisch-Thüringische Schokoladen-Manufaktur, these seminars offer the opportunity to experience chocolate and praline production live – and even make your own chocolate and praline creations. 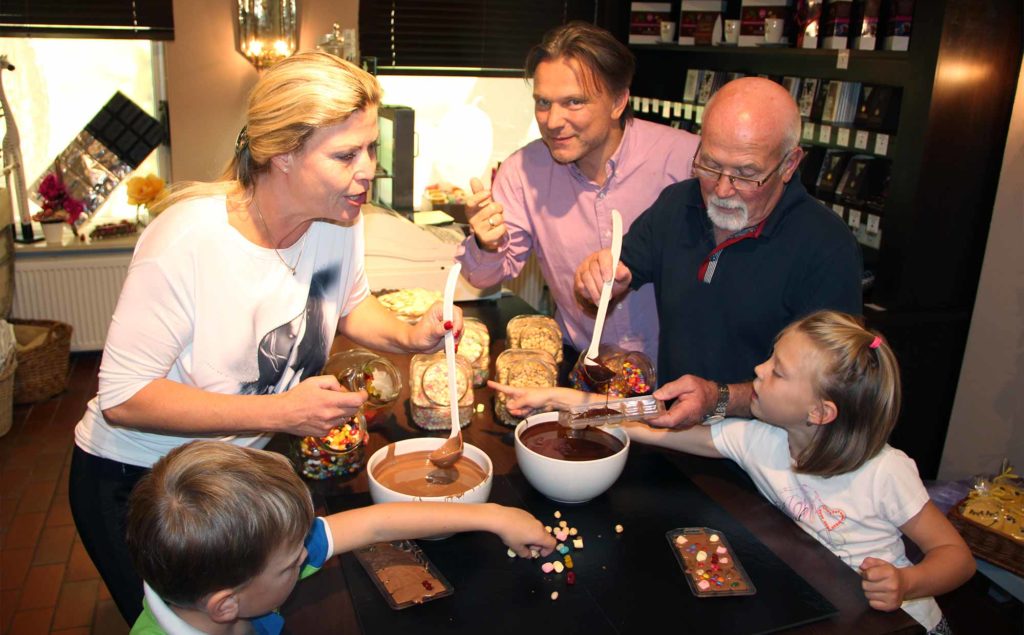 In the chocolate seminar, participants learn how the sweets are made. ©Romantik Hotels