When tradition becomes a trend – A classic ski variation is making a swing-ing comeback on the slopes. More and more winter sports enthusiasts are skiing in the “telemark” style invented over 150 years ago in Norway

It looks so effortless, so wonderfully elegant when telemarkers glide down the slopes in their distinctive style. Similar to cross-country
skiing, the heel of the ski boot is not fixed but free to lift. For the beginner, this freedom is unsettling at first but it’s the basis of the technique. This is what allows the skier to carve turns downhill in a kind of lunge. The front knee is strongly bent; after each curve, there is a lead change and the skier performs a graceful curtsy on the other leg.

Lunging around the curves 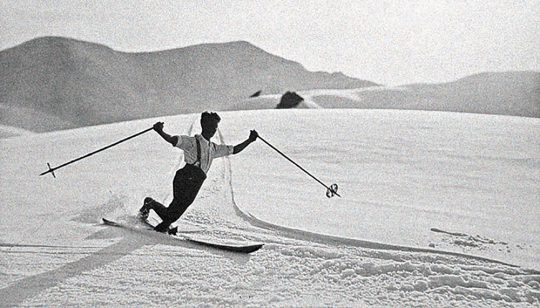 In very simple terms, that’s what this old technique, the basis of modern Alpine skiing, is about. The Norwegian Sondre Norheim developed this nostalgic trend sport in 1860. During the long winter months in the snowy province of Telemark, having skis under your feet is an everyday occurrence. In his home village, Morgedal, Sondre was an avid skier already as a child. Whenever he had time, he stood on his beloved skis and experimented with a new binding between the ski and boot. As only the ball of the foot was fixed with the ski, this gave his construction an unprecedented flexibility on every kind of slope. Sondre lunged around the curves, even in deep snow, with a lead change after each turn. This was relaxing for the skier and also looked elegant. In honor of the skiing pioneer, this new technique was named after his native region, Telemark.

Renaissance in the USA

Starting in 1940, the importance of telemark skiing gradually faded and was replaced by new techniques that were easier to learn, though not as elegant. In 1980, U.S. ski instructors rediscovered telemarking and, from there, the invention of a passionate Norwegian skier found its way back to Europe. In general, skiers can use the telemark technique anywhere where standard Alpine skiing is offered. Slopes that are a bit wider, easy to intermediate, are ideal. Telemarking lessons are now offered in all well-known ski regions and are suitable for beginners as well. More experienced skiers need about two days to apply the basics of the technique on the slope.

The telemark scene is booming

Everywhere you look, there are fan gatherings and competitions in winter for the three Nordic disciplines of telemark skiing, ski jumping, and cross-country skiing. Races at World Cup level are organized by the international ski association FIS. The big goal: To take the traditional technique to the Olympics. One old Norwegian would fall to his knee with excitement.

In these selected Romantik Berghotels you can go telemark skiing. www.romantikhotels.com/mountainhotel