The forgotten language of the Dolomites

The forgotten language of the Dolomites

he treasure of the Dolomites hides in five valleys: Val Badia, Val Gardena, Val di Fassa, Valle di Fodom (Buchenstein) and Valle d’Ampezzo. All are shaded by the up to 3,152 meter high Sella massif, in the Italian part of Tyrol. In these secluded areas, which used to be difficult to reach, an almost forgotten language can be found! Ladin, over 2,000 years old and once the most widespread language in the Alps. Today it is only spoken by about 30,000 people.

The origin of this mixture of Romansh and Latin dates back to 15 BC. At that time the Roman general Drusus conquered the region. In addition to Roman law, he brought with him above all the Latin language, which survived as Ladin.

Today Ladin is being taught again at the schools in the valleys of the so-called Dolomite Ladins. Museums tell their story, the old costumes are worn at festivals by all generations, the Ladins are proud of their long history.

For holiday guests in the region even language courses are offered, and the traditional, down-to-earth Ladin cuisine is maintained: in the old-established families, and also in courses for interested hobby cooks.
Here, the participants learn everything about regional specialties such as Schlutzkrapfen (stuffed ravioli), Tultres (dumplings stuffed with sauerkraut or spinach and ricotta) or cheese dumplings. A treasure from the Dolomites – linguistically, culturally and culinary valuable and unique! 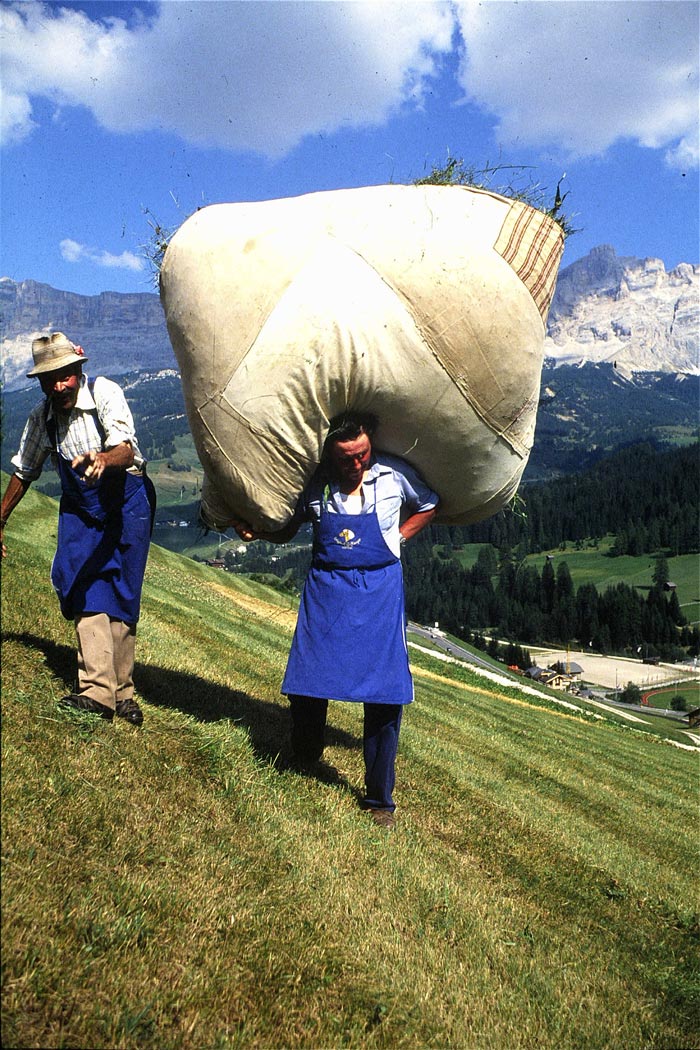 e traditional gastronomy in the five valleys of the Ladin people has its roots in the farmhouse cuisine of their ancestors. The remote regions in the Italian part of Tyrol were previously hard to reach. Here, not only Ladin survived as an almost forgotten language, but also a great deal of culture and tradition. This includes the cuisine with its traditional dishes, whose preparation and recipes have been handed down from generation to generation over the centuries.

It was hard work to wrest anything out of the barren soils on the slopes of the Dolomites. Just as in the past, regional products still form the basis of dishes that are still put on the table today by the long-established families or that are on the menu in the restaurants.

Courses for hobby cooks are also offered in many places, which present the preparation of classics such as bales (dumplings), schlutzkrapfen (spinach-stuffed ravioli), furtaies (spiral-shaped fried desserts) or the most famous specialty of the Dolomite valleys – the well-loved turtres. These are fried dumplings with a filling of spinach and quark (fresh curd cheese). They can also be prepared with a sauerkraut or potato filling. Many Ladins see turtres as a symbol of their own, often privation-filled history: Make the most of whatever you can find, with creativity and energy.

Turtres from the Ladin valleys – a simple dish with simple ingredients, which is particularly popular in cooking classes. Because it tastes good, has a long tradition and the recipe is not too difficult to follow.

Chop the blanched spinach finely and mix into the quark. Chop garlic, sage and chives very finely and stir with the quark and spinach mixture. Season with salt, pepper and nutmeg.

For each turtres, spread one tablespoon of this mixture in the middle of each piece of dough and cover it with another layer of dough. Press the edges together. Deep fry in hot oil. Turn the turtres as soon as the underside is light brown. Drain off the oil before eating.