They wear rolled-up drill shorts that are good for grabbing. In traditional Swiss wrestling, burly fellows compete with the goal of pinning the opponent to the sawdust. The winner receives fame, glory and a live bull

In a circular ring filled with 23 cubic meters of sawdust, two opponents wrestle, accompanied by a referee. A modern sport that is highly popular throughout the country, Schwingen has in fact been part of the festival culture in some Swiss regions for centuries. The earliest portrayal of Schwingen (the word is a combination of Switzerland Schweiz and wrestling Ringen) hails from the 13th century. 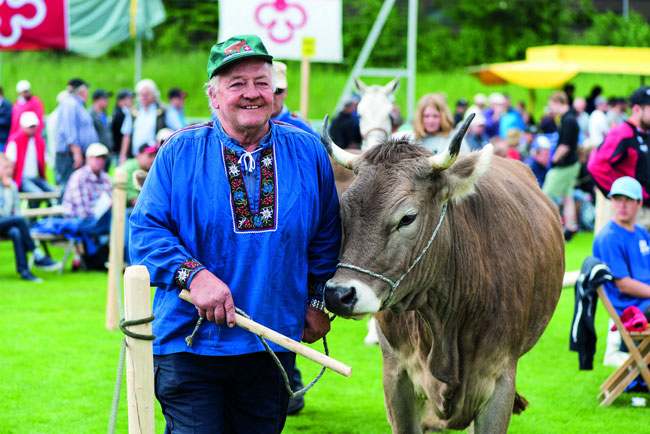 The winner receives as prize a valuable breeding bull

Wanted: the wrestling king
As a herdsman’s sport, Schwingen was especially popular at Alpine and inn festivals. Prizes ranged from a piece of fabric for pants to a sheep. The winner’s honor was considered the main prize. With the founding of the Swiss Schwingen Association in 1895, standardized rules were established for all of Switzerland for the first time. Ever since then, the new champion, the “Swiss wrestling king,” has been crowned every three years at the Swiss Wrestling and Alpine Festival (ESAF). Around 300,000 visitors are expected to attend this year’s ESAF in Zug from August 23 to 25. The fact that this national sport continues to be so popular today must have something to do with the Swiss dedication to preserving tradition. Today, the champion still receives a living prize, the winner’s bull. Some bulls have made Swiss wrestling kings rich thanks to their valuable semen.

Respect for the opponent
One round (Gang) lasts five minutes. Whoever then receives the highest number of points from the jury is the winner. At a Schwingen festival, wrestlers have to complete six rounds, at ESAF even eight. The wrestlers perform any of 100 different moves and 300 combinations to throw the opponent, held only by the wrestling breeches, to the ground. The opponent lying with both shoulder blades in the sawdust loses the round. After each round, the winner brushes the sawdust off the opponent’s shoulders. Despite its popularity and widespread media coverage, Swiss wrestling has preserved its original values: respect and a down-to-earth attitude.
More info: www.esv.ch

More information about the hotels: