Steering a dog sled yourself through a snowy landscape – a winter dream that can come true! At husky camps, participants learn how to do it 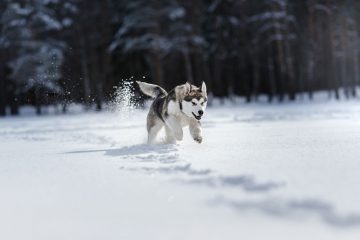 Snowy fun – a husky in its element

The snow crystals glitter in the morning sun. On this clear winter day, 32 fast paws are waiting impatiently. The harnesses have been fitted, the team is ready, and off we go! Six dogs leap into line and pull the sled through the white Vorarlberg landscape. Their desire to run is irrepressible – after a brief warm-up, they tear through the snow at 40 kilometers per hour.

Such a sled ride through peaceful nature is a one-of-a-kind experience. The exciting part: Anyone can steer their own team of sled dogs! Husky workshops are offered in many regions in Austria (e.g. Vorarlberg) and Switzerland (e.g. Chur, Appenzell). Depending on the workshop, participants can spend anywhere from a day to a week at the dog camp. Here, they learn what it means to be a musher, a dog-sled driver.

“Anyone who’s not allergic to dog hair can participate,” says Anton Kuttner, who conducts a workshop in Vorarlberg and is known as “Husky Toni.” He adjusts the program to participants’ fitness levels.

Only in a team

The motto of the workshops is “learning by doing.” But a bit of theory is necessary. Before participants get to meet their four-legged team members, they learn the essentials about huskies, their care, dog sledding as a sport, and the equipment used. And then: lots of sniffing and affection. The participants get acquainted with the huskies, feed them, and put on snow shoes and take walks with them in the deep snow. They learn the most important commands and then, applying their newly acquired knowledge, steer a dog sled. At the same time, the mushers-in-training also strengthen their team spirit. They need to help each other, for example with harnessing and unharnessing the dogs. Team building is everything in dog sledding – and, naturally, that applies to the relationship with the animals as well. Husky Toni: “The dogs show very honestly and clearly when something is wrong in the team, when the work together is not harmonious. Then they’re irritated and much less motivated.”

Those who want even more cool team spirit can learn how to build an igloo after the sledding adventure. Sticking together is a key aspect of building the dome-shaped huts made from compacted snow blocks – for the builders and the blocks.

Huskies are friendly by nature, attentive, social, and intelligent. They have an impeccable sense of direction and never forget paths they have traveled on, even when the paths are under a thick blanket of snow. Huskies are highly active working dogs and need to be exercised until they are tired every day. A husky is perfectly adapted to its cold environment. In a snowstorm, a husky can survive a night completely immersed in snow by curling up with his nose under his tail. This functions as an air filter and pre-warms the air.

END_OF_DOCUMENT_TOKEN_TO_BE_REPLACED 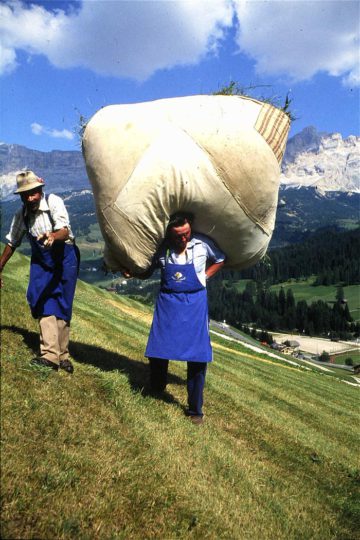 Lead dog in front of the team – Husky rides have season in every season (Photo: Nature Trails)

Rides with the husky

Flying snow crystals, freezing cold, blue sky, and the steamy breathing of animals – husky tours in the snow are fun. But dog sledding is not a pure winter sport. Even when the flakes have melted and nature wears its green spring dress, the dogs keep their irrepressible urge to run and are ready for departures. “I have been offering workshops with my dogs for eight years. Since then, a large part has shifted into the summer”, says Anton Kuttner, who runs Husky workshops in Vorarlberg and is known as Husky Toni. Instead of deep snow, humans and animals then wander over lush mountain meadows, through forests and high valleys. Or drive with so-called Dogscooters on selected routes along the Rätikon mountain range in Vorarlberg (Austria).

Before the first trip, after learning how to get to know the dogs, the most basic skills are taught in the camp: introduction to the world of sled dogs, briefing on the most important commands, learning how to use the steering and turning technique, preparing and tying the animals. Then the most exciting part begins: Two huskies are hitched up in front of the dog scooter. That is a big scooter, which is used in train dog sport. Already, the ten to twelve kilometers long exit can begin – past mountain meadows, in the background the towering Alps. The workshop guests are thrilled to enjoy the ride. “The fact that huskies are so friendly and yet extremely powerful fascinates the participants again and again,” says Husky Toni. He smiles: “Anyone who has come to know the animals in winter, also likes to return in summer. Huskies season runs all year round. ” 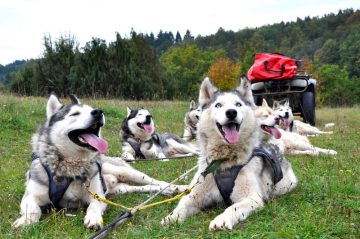 Here you can book husky events: