Half-timbered towns and villages still characterize many regions in Germany today. More than 2.5 million half-timbered buildings survived the wars and were not destroyed. What makes them so special?

T imber framing is an eye-catcher; hardly anyone can escape the fascination. Medieval town centers convey a feeling of home and coziness, and have a soothing effect on residents and visitors. Why is that? No historical half-timbered house is identical to another; each has its individual charm and own history. These houses have been there for centuries, they were built to last. Half-timbered houses show us how people used to live in past times and they are an expression of woodworking artistry with an endless variety of shapes, carvings and symbolism. Roughly adzed beams and slanted walls or floors give the houses their often picturesque appearance that enchants the beholder. 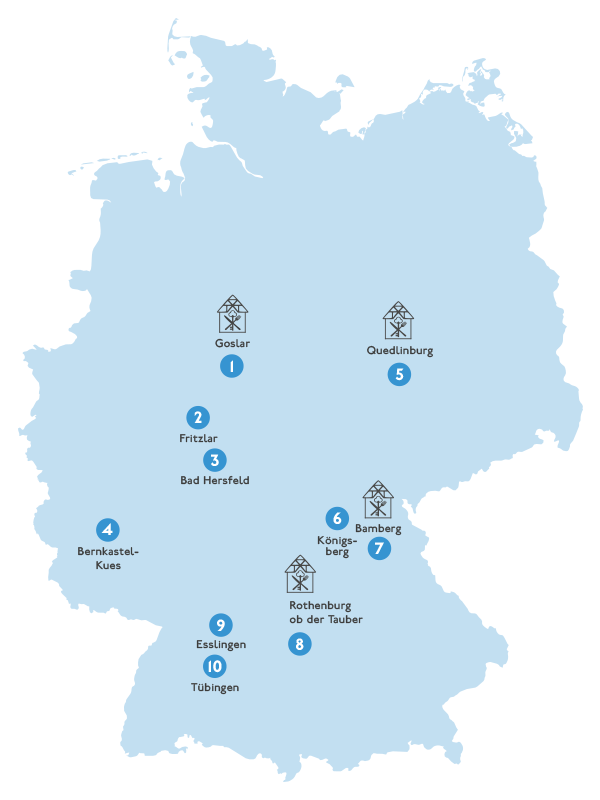 The most beautiful half-timbered towns in Germany

On a voyage through history, you visit ten very well-preserved half-timbered towns with historical centers and medieval flair. Many have been listed as UNESCO world heritage sites. A list of half-timbered towns worth may well seem virtually endles. Over 100 towns with half-timbered buildings have joined up in the “Deutsche Fachwerk-straße” (German Timber-Frame Road). You would have to travel about 3,500 km to see them all: from the Elbe (Stade) in the north to Lake Constance (Meersburg) in the south. 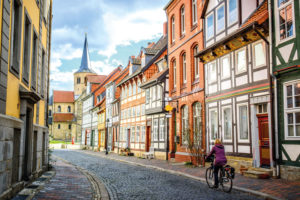 Like Einbeck 60 kilometers away, the district of Goslar in Lower Saxony has scores of colorfully restored and beautifully carved half-timbered houses.

Fritzlar
The timber frame buildings in this historical imperial and cathedral town are some of the oldest in Hessen. Especially worth a visit: the historical marketplace.

Bad Hersfeld
The half-timbered houses that adorn the town center have witnessed history. There are over 200 landmarked buildings to admire in the historical old town. 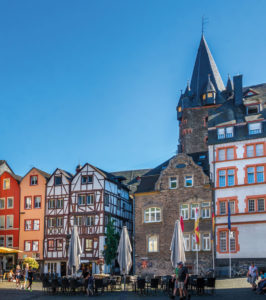 Bernkastel-Kues
The historical center of this little town on the Moselle is formed by a magnificent half-timbered ensemble. The medieval marketplace with the town hall from the Renaissance is the highlight. 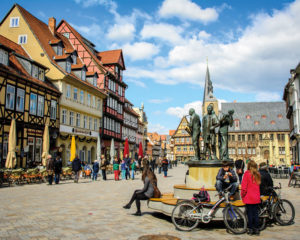 Quedlinburg
This town bordering the Harz mountains is considered a half-timbered community par excellence – there are over 1,300 half-timbered houses from six centuries ranging from the Middle Ages to classicism in a small space here.

On site:
Romantik Hotel am Brühl

Königsberg (Bavaria)
The Lower Franconian Königsberg is a picturesque little town. Its old town is a historic landmark with half-timbered facades from various eras. 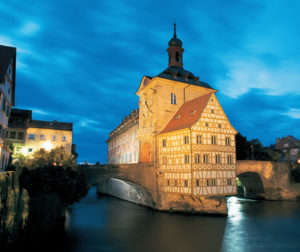 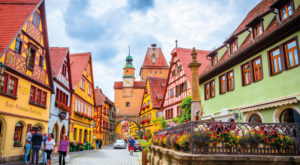 Rothenburg ob der Tauber
Visitors feel as if they have gone back in time to the Middle Ages in what is probably Germany’s most famous half-timbered town. The largely preserved old town has become a symbol of German romanticism. 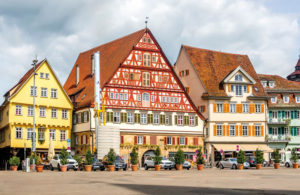 Esslingen
Over 200 half-timbered buildings from the 13th to 16th century can be admired in the city on the Neckar. The presumably oldest one is on the street Heugasse. It was built in 1261. 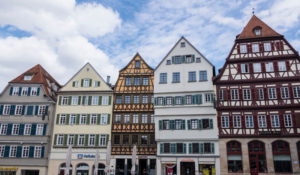 Tübingen
The remarkably well-preserved old town has many half-timbered houses going back to the 15th century. The most imposing one, the Fruchtkasten (literally “the fruit box”), was used for stock-keeping.

Though Germany is considered the classic timber framing country, half-timbered houses are also an architectural tradition in many neighboring countries. 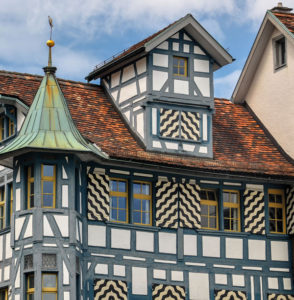 Austria / Switzerland
Classic timber framing is seldom found in Austria; some houses can be found in Vorarlberg. In the northeastern part of Switzerland, the Zurich wine country, and in Thurgau, many old farmhouses are built in the half-timbered style. In Switzerland, they are are called “Riegelhäuser.” 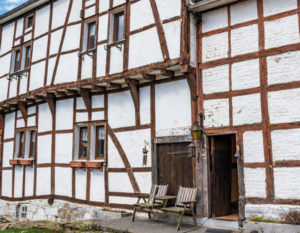 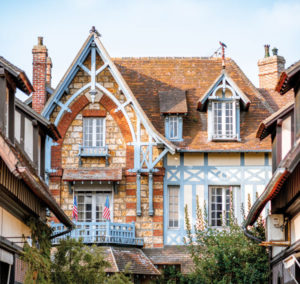 The fragmented structure of the framework is typical of Normandy. Row of houses in Deauville.

France
The half-timbered houses in Alsace in France are very similar in appearance to the typical German timber framing. Further to the west, in Champagne or Normandy, a typically French half-timbered style established itself (around 1600).

Great Britain
Half-timbered houses were built in England starting in the Middle Ages. They often strongly resemble the French half-timbered style. An especially striking variation is the Tudor style, which defined townhouse architecture in the late Middle Ages (around 1500).

What is a half-timbered house made from? 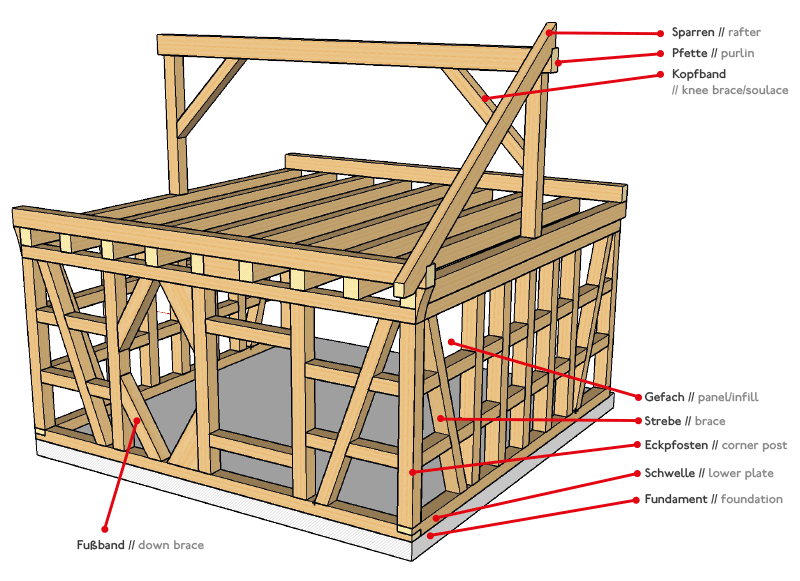 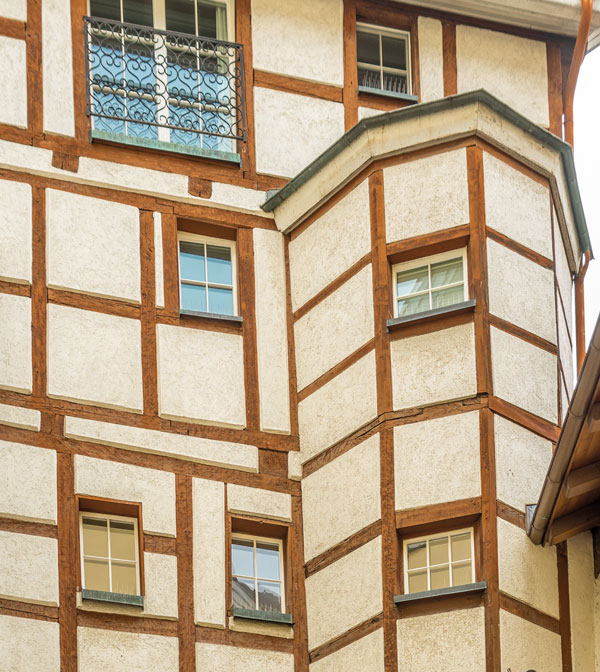 The basis of timber framing was and remains wood as a building material. Half-timbered buildings have a skeleton structure with load-bearing timber and nonstructural infills made of daub or bricks. The primary function of the timber is to provide structural support. The different timber elements take up the loads and direct them to the foundation or the stone base. Timber framing is a highly ecological, environmentally friendly construction method that is highly suitable for our current times.